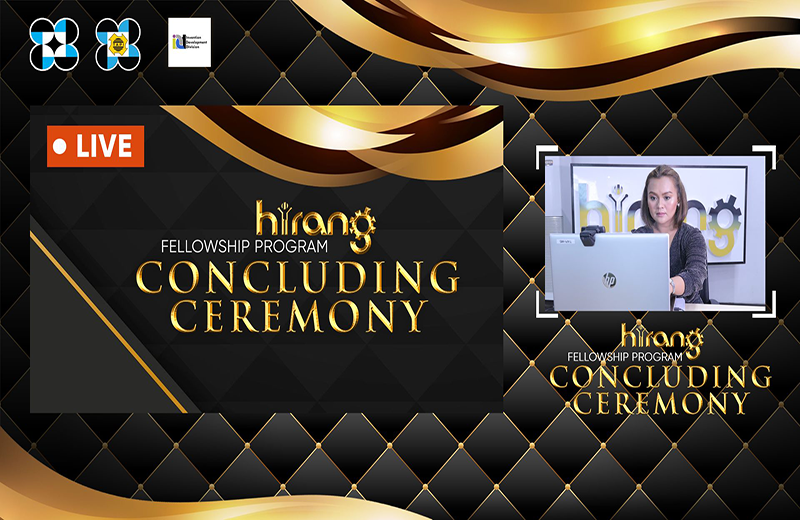 The Department of Science and Technology - Technology Application and Promotion Institute (DOST-TAPI) sealed the Honing Innovations, Research, Agreements and Negotiations of the Government-Funded Technologies (HIRANG) Internship Program by recognizing the efforts and accomplishments of the seven participating DOST Research and Development Institutes (RDIs) during the HIRANG Fellowship Program Concluding Ceremony held last October 30.

Among the seven participating RDIs, the DOST-FPRDI was hailed as the best performing team and brought home the HIRANG Excellence Award.  Factors such as completeness of deliverables, adherence to deadlines, quality of valuation reports and internship team performance were measured to select the recipient of the award.  On the other hand, DOST-MIRDC bagged the Outstanding Valuation Report Award for their output on the Electric Potter's Wheel technology.

As part of the special awards distributed during the concluding ceremony, the following interns from each RDI were also awarded the Distinguished Fellow Award in recognition of their remarkable performance during the course of the internship program:

The awardees were selected based on the ratings of their respective HIRANG mentors: Dr. Lawrence L. Ilag for DOST-PNRI and DOST-PTRI; Atty. Anne Mariae Celeste V. Jumadla for DOST-ASTI and DOST-MIRDC; Dr. Myrna O. Nisperos for DOST-FNRI and DOST-ITDI; and Dr. Gonzalo C. Serafica for DOST-FPRDI.

In his opening remarks, DOST-TAPI Director Edgar Garcia congratulated the RDIs for delivering the program requirements despite the challenges brought by the pandemic. These limitations included lack of means to travel and to conduct face-to-face meetings, which were crucial in completing transactions with potential licensees.

“Everyone adapted to the new normal – meetings on video conferencing applications, negotiations on various digital platforms, and unlimited exchanges of electronic mails and chats.  It is true that when people with the same goal work together, anything can be possible,” Director Garcia said.

DOST Undersecretary for Research and Development, Dr. Rowena Cristina Guevara, also graced the event by delivering the keynote message.  She acknowledged the dedication of all RDIs and their mentors who were able to adapt and deliver the program deliverables.

"As I have mentioned during the HIRANG Launching, people under this fellowship are considered the chosen ones or “hinirang”, and they truly are because of their hard work and efficiency in paving the way for RDI technologies to be commercialized," the Undersecretary emphasized.

DOST-TAPI launched the HIRANG Internship Program last January 2020 as part of the DOST-funded project, "Support to the Commercialization of 500 DOST-Generated Technologies and Strengthening the Country's Intellectual Property and Technology Portfolios."  The program aimed to capacitate the seven research and development institutes of DOST in the fields of intellectual property valuation, technology pitching, negotiation, and licensing of their own technologies.

During the course of the program, a total of 23 staff from the participating RDIs were trained and guided by the five HIRANG mentors on technology transfer and commercialization.  In its conclusion last October 30, a total of 12 valuation reports, 12 signed term sheets and four signed licensing agreements were collectively delivered by the all RDIs.

To follow safety measures to prevent the spread of COVID-19, the HIRANG Fellowship Program Concluding Ceremony was held virtually through the Zoom platform with Ms. Gel Miranda as the program host.